Cardhu whisky distillery is located in the middle of the Speyside whisky region in the heart of the Scottish Highlands. 7 miles from Craigallachie on the B9120.

The Cardhu (car-doo) malt whisky is the signature malt for Johnnie Walker Blends.

With an original founding date of 1811. They have been crafting richly honeyed single malt whiskies for over 200 years.

How the Cardhu story began

This was a typical sideline of the tenant farmer using barley, peat and water from the land to good productive ends.

The Mannoch Hill nearby provided both the spring water and the peat with which Cardhu whisky was made.

In those days when it was illicitly distilled, the small kegs of whisky were carried on ponies, often at night, over the Mannoch Hill and down into Forres and Elgin where there was always demand.

His wife, Helen looked after the mashing and fermenting disguising the aromas as bread making and if by chance Excise officers came by.

She would sit them down for tea and while they ate, would slip out and fly a red flag from the rear of the farm – a prearranged signal to her neighbours to hide their distilling apparatus.

However, in 1884, the worn-out distillery was replaced by the new Cardhu distillery located on additional land leased in perpetuity by Elizabeth.

Among the equipment she sold off during reconstruction was a pair of often repaired and thin-skinned pot-stills to a new distiller. A Mr.William Grant for £120 (=£ 14,160 at todays values) who was confident that he could do well with the whisky he was going to produce in his Glenfiddich Distillery.

By the 1890s, the Cardhu whisky had become the primary malt in the blends produced by John Walker & Co., Kilmarnock.

In 1893 the Cardhu distillery was sold to Walker’s for £20,500 (= £2.4 million at todays values).  To this day remains an important component of Johnnie Walker blends.

The distiller name is changed to Cardow in 1908.

Control of Johnnie Walker passed to Distillers Company Limited (DCL) in 1925. Then became part of Scottish Malt Distillers (SMD) in 1930.

A major refurbishment of the distillery was carried out in 1960 and the Stills were increased from 4-6.

In 1971 Cardhu’s three pairs of stills were converted to heating by internal steam coils.

The distillery name reverts back to Carhu during 1981.

A visitor’s reception centre opened in 1998.

Today the office, the malt-barns and the kiln, including pagoda heads are all that remain of Elizabeth Cumming’s ‘New’ Cardhu of 1884.

They even became a kind of alternative pedigree and at Cardhu the court judgements are framed and hung proudly on the wall of the distillery manager’s office.

Cardhu means “Black Rock” in Gaelic. The whisky had been known as the Anglicised “Cardow”. The name was changed to the Gaelic Cardhu in 1981.

Founded legally in 1824 by John Cummings.

The Cardhu distillery is regarded as the spiritual home of Johnnie Walker. Producing a rich honeyed malt whisky. It is in the world top ten of single malt whiskies with huge followings in France and Spain.

Plus special cask reserve and distillery exclusives for visitors. 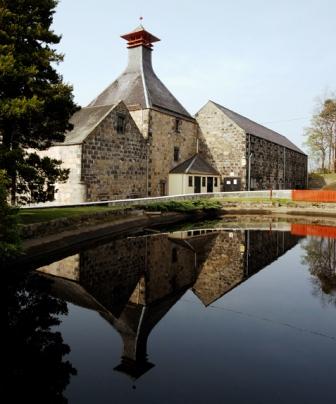 Take a tour of the Cardhu Whisky Distillery

The Cardhu Whisky Distillery visitors centre is well worth a visit and regularly run guided tours of the distillery throughout the course of the day.

Click here for more information on the Cardhu visitors centre

Our Cardhu Whisky Range - In stock and available to buy