Dufftown whisky distillery is in the very heart of the Speyside region Scottish highlands. Located only 1/2 mile due south of Dufftown (duff-town) centre.

A major contributor to the Bells blended whisky. When bottled as a single malt the Dufftown whisky house style is a soft fruity malt whisky.

How the Dufftown story began

Located on the south side of Dufftown it draws its waters from Jock’s Well in the Conval Hills.

This was not a purpose built distillery but a conversion from an old meal mill. The following year the Dufftown distillery was acquired by P MacKenzie & Co owners of the Blair Athol distillery in Pitlochry to the south.

The whisky from the distillery becoming an important component of the Bell Blends.

In 1968 the floor malting is stopped.  The number of Stills increased from 2-4 then six years later another pair were added.

During 1979 two more stills are added making the total eight.

The whisky produced is an important constituent of Diageo’s Bells Blends.

However they did release the whisky as a single malt. The Dufftown 15 year old and have bottled it under the Flora & Fauna Label.

Being named after the town itself it could be assumed that it was also the first distillery to be set up in Dufftown.

3 wash and 3 spirit pot stills all fitted with sub-coolers. 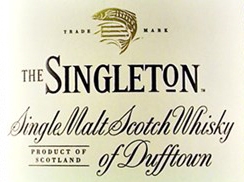 
No visitor facilities at the Dufftown distillery

Dufftown malt whisky  is a major contributor to the Bells blended whisky.

Originally the malt whisky was released as a 15 year old Flora & Fauna label with a single release of a 21 year old under the Rare Malts Selection.

These where replaced by the “Singleton” range that included releases from two other distilleries, Glendullan and Glen Ord.

The Singleton of Dufftown includes a 12 year, 15 year and 18 years old. With  Trinite, Liberte and Artisan for duty free markets.

A non age Statement Spey Cascade was added in 2014.

When bottled as a single malt the Dufftown whisky house style is a soft fruity malt whisky.

Our Dufftown Whisky Range - In stock and available to buy