The Glen Garioch whisky distillery is situated in the Highland whisky region of the Scottish  Highlands. Located in Oldmeldrum 20 miles along the A947, north west  of Aberdeen.

How the Glen Garioch story began

John Manson (founder) with his younger brother Alexander in 1794 establishes the Glen Garioch distillery and brewery on the site of an old tannery. Which had a water supply from the Percock Hills.

A statistical account of Meldrum written by Rev Thomas Tait in 1794 states there are a distillery and brewery, lately established and both are in a thriving way.

Thomas Simpson purchased both the distillery and the brewery in 1798 and in 1827 Ingram, Lamb & Co became new owners and expanded the buildings.

The era of 2 names, in 1837 the Strathmeldrum Distillery Company bought Glen Garioch headed by John Manson Junior, son of founder.

The distillery it self was still called Glen Garioch. In a Memorandum of John Manson’s stock in June 1838, shortly before his death, records £1,400 lent to John Manson Junior to purchase Glen Garioch.

During 1856 The Inverury and Old Meldrum Junction Railway opened nearby so the whisky casks no longer had to travel to Aberdeen by ox cart.

After 35 years of Sanderson family half-ownership, (1921) William Mark Sanderson, son of William Sanderson along with other investors, form the Glengarioch Distillery Co Ltd to take 100% ownership.

The distillery is sold in 1933 to Booth’s Distilleries Ltd. Then five years later in 1937 Scottish Malt Distillers (SMD) as part of DCL, purchase Glen Garioch.

World War II: The Distillery was closed for the duration of the Second World War, some buildings used as army dormitories. SMD restored production in 1946.

Due to a limited water source SMD closed the distillery in 1968 and offered it for sale. Two years later Stanley P Morrison Ltd pays £150,000 (£2,505,000 at todays values) for the distillery and low-level production is resumed.

During 1972 Glen Garioch becomes the first distillery in Scotland to gas fire its stills.
Later on in November: Glen Garioch is released as a single malt Previously only used in blends such as Bell’s, Grant’s Standfast and Drambuie. Also a new water source is discovered at Coutens Farm.

Planning permission was obtained in 1977 for the greenhouse project to make use of waste heat from the distillation process.

The following year the Greenhouse project supervised by BBC Scotland’s Jim McColl is opened this attracts publicity and brings streams of visitors. The distillery expands from 2 to 3 stills and a visitor centre is opened.

In July 1994 Stanley P Morrison Ltd is acquired by Suntory Ltd; they mothball the distillery the following year.

4 Tonne Full lauter stainless steel mash tun.
8 Stainless steel washbacks with a 48 hour fermentation time.
1 pair of stills with a further smaller spirit still that is out of use.

The spirit produced is taken to Glasgow by road tanker to be filled into ex American oak bourbon and European sherry casks. Then returned to the four warehouses for maturing. 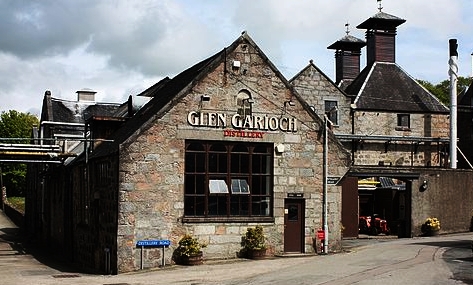 Take a tour of the Glen Garioch distillery

The Glen Garioch whisky distillery visitors centre is well worth a visit and regularly run guided tours of the distillery throughout the course of the day. A number of the tours include tasting sessions where you can sample some of the drams they have to offer.

Our Glen Garioch Whisky Range - In stock and available to buy