The Glen Spey whisky distillery is located in the heart of the Speyside whisky region in the Scottish Highlands. Located in a side street in the market town of Rothes.

How the Glen Spey story began

James Stuart a local corn merchant with distilling interests in the Macallan distillery at Craigellachie established the Glen Spey distillery in 1885.

He appears to have built a distilling utility on to his oatmeal mill called Mills of Rothes and this developed to become the fully-fledged Glen Spey distillery.

This was the first time a non-Scottish company had acquired ownership of a Scotch distillery and is an indication to the extent to which whisky was becoming regarded as an important product.

In 1962 Gilbey merged with Justin & Brooks and United Vintners to form International Distillers & Vintners. The distillery was renovated and extended by adding another pair of stills in 1970.

At some point in 1972, IDV was taken over by Grand Metropolitan. Due to the mergers of the 1980-90’s the distillery eventually became part of the Diageo portfolio.

The exterior of the distillery is still pleasantly Victorian with solid, weathered stone buildings. Much of the interior, too, is in period.

Production water is taken from the Doonie Burn. Using lightly peated malt barley. There is a semi-Lauter Mash tun with 8 Stainless Steel Washbacks.

There are two pairs of stills, the second pair being added during the 1970 rebuilding of the distillery by IDV. The stills have purifiers fitted to lighten the spirit produced.

Glen Spey malt whisky is bottled as a 12 year old under the Flora and Fauna Label.

The whisky can also be found in the independent bottlers ranges. 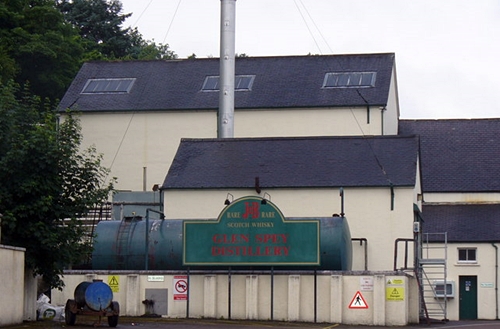 
No visitor facilities at the Glen Spey distillery

Our Glen Spey Whisky Range - In stock and available to buy