Glenfarclas whisky distillery is located in the Speyside region of Scotland. Under the Grants ownership since 1865 now into its sixth generation with George Grant.

Glenfarclas (glen-fark-lass) means “Valley of the green grass” in Gaelic. The distillery has been under same independent family ownership since 1865

The story of Glenfarclas Distillery, established in 1836 by Robert Hay, is as rich and colourful as the great Glenfarclas Single Highland Malt Scotch Whisky itself.

It is the story of one Scottish family, the Grants, who since 1865 have been united by a single vision – the creation of the perfect malt whisky, the ultimate taste of Scotland.

The present days chairman’s great-great grandfather, John Grant was born in 1805 at the family farm of Lynbeg in the heart of Speyside.

John Grant became a highly successful farmer, owning several farms in the area and breeding champion Aberdeen Angus cattle. So it was only natural for him to be interested in the Rechlerich Farm, on the Ballindalloch Estate, when it became vacant in 1865.

Rechlerich Farm was renowned in the area for the Glenfarclas Distillery, established in 1836 by the previous tenant farmer Robert Hay.

John Grant remained at his home farm Blairfindy letting his son George look after Rechlerich Farm, whilst the distillery was sub-let to John Smith, a descendant of John Grant’s great uncle.

John Smith left in 1870; to build Cragganmore distillery and John Grant took his son into partnership. During 1897 the distillery was reconstructed and modernized

In 1889, John Grant died, leaving George to run both the distillery and the farm. Sadly, a year later George also passed away, leaving the license to his widow and his two eldest sons, John and George.

They later formed the Glenfarclas-Glenlivet distillery company, with Pattisons of Leith, who held a 50% share.

Unfortunately, it proved to be a troublesome partnership, and eventually collapsed with the Pattisons bankruptcy of 1898 . This left John and George in a predicament, However they formed their own company, J. & G. Grant.

By 1914, after many years of hard work, family commitment and shrewd accounting, the future of Glenfarclas was secure in the hands of the Grant family. However, John Grant retired in this year due to ill health, and his brother George continued as sole partner.

1949 saw the death of George Grant senior, and the marriage of his son George S. Grant, to Catherine. They went on to have three children, including a son, John L.S. Grant, who joined Glenfarclas in 1973.

George S. Grant retired in 2001, after 52 years as Chairman, and sadly passed away in 2002, John L.S. Grant succeeded his father as Chairman.

John L.S. Grant also has a son, George, who was born in 1976, and represents the sixth generation of the Grant family. He too, has joined the company and looks set to continue the legacy of his forefathers.

The number of stills was increased from 2 to 4 in 1960, Glenfarclas opened its Visitor Centre in 1973.

Three years later the stills where increased from 4 to 6. These Stills are largest on Speyside.

Wash stills fitted with rummagers. Copper Chain rotating in the bottom of the wash stills to stop the solids sticking to the stills.

Glenfarclas distillery, 1968, are first to introduce a cask strength single malt  bottling later to be named the Glenfarclas 105.

2001 the distillery release the “Flower of Scotland” gift tin.

The following year 10 new vintages are released. This is followed up in 2007 with the “Family Cask” series, a range of 43 consecutive years.

During 2009 a third release of “Family Cask” series.

The Glenfarclas whisky distillery is renowned for producing Single Highland Malt Scotch Whisky in the traditional Speyside style, with a heavy Sherry influence. 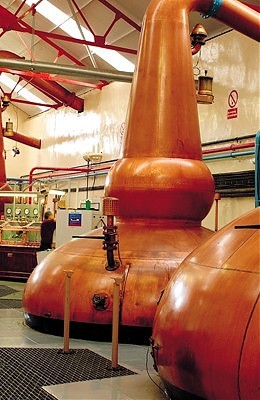 Take a tour of the Glenfarclas whisky distillery

The Glenfarclas distillery visitors centre is well worth a visit and regally run guided tours of the distillery throughout the course of the day. A number of the tours include tasting sessions where you can sample some of the drams they have to offer.

Click here for more information on the Glenfarclas visitors centre

Our Glenfarcles Whisky Range - In stock and available to buy