Glenugie whisky distillery was located in the Scottish Highland region.  In the old fishing port of Peterhead.

Founded in 1875 the distillery was closed in 1983 and demolished.

How the Glenugie story began

The Glenugie whisky distillery established in 1834 by Donald McLeod & Co. Built on the site of an old windmill. Originally called Invernettie near Peterhead, at the mouth of the river Ugie.

The Glenugie whisky distillery, the only Eastern Highland distillery north of Aberdeen.

In Alfred Barnard’s “The Whisky distilleries of the United Kingdom”.

He states, “The distillery is situated at the foot of a hill, and near the sea shore. It was built in the year 1875, in a modern style, on three sides of a square, and was acquired by the present proprietor about three years ago, who has made very considerable improvements and additions to the plant. And the increasing demand for the whisky will necessitate very soon the erection of new warehouse and maltings.”

Despite the investment Scottish Highland Distillers became insolvent and was wound up in 1879. The next owner, George Whyte & Co, had no more success and was sequestered in 1882.

The distillery was silent for much of WWI.

Opened briefly 1923-24 seasons as Glenugie Distillery Ltd then was silent again 1925 to 1937. When it was reopened by Seagar Evans & Co Ltd

In 1956 Scheney International acquired Seagar Evans & Co Ltd and invested heavily in equipment. Replacing the coal fired boiler with an oil system. A pair of new stills with condensers was installed.

Which meant a doubling in production. This strained the warehouses to capacity, the solution was found by discontinuing on site malting and the malt house converted to warehouse space.

At some point the parent company Scheney International re-organised its Scottish distillery portfolio so that the distilleries were under control of Long John International.

Glenugie was one of the distilleries that didn’t survive 1983 the market at the time was suffering from over capacity and around a dozen single malt distilleries were closed in that year.

The distillery was dismantled and the premises were taken over by an engineering firm that came with the oil boom. 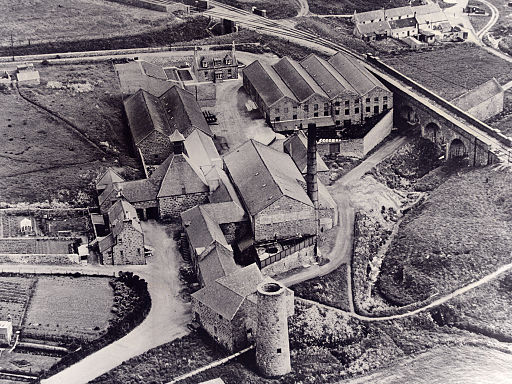