Highland Park whisky distillery is classed as Island region whisky,  located on the southern edge of the town of Kirkwall in the Isles of Orkneys.

The most northerly whisky distillery in Scotland.

Records show that a illicit still was established in the area in the 1790’s by a local priest Magnus Eunson, who was linked to illicit distilling and smuggling in the area.

During 1798 the founder David Robertson establishes the distillery. Which is taken over in 1816 by John Robertson, the Excise Officer who had arrested Magnus Eunson some years earlier.

Robert Borwick, a Kirkwall merchant, in 1825 obtains a license for the Highland Park Distillery. The land was served by two strong springs of crystal clear water fed by a pool at Cattie Maggie’s at Greenval.

On 18 August 1826, he acquired the land rights together with the distillery, malt barn, and ‘whole other buildings’ from John Robertson.

Robert’s son George Borwick takes over in 1840. the distillery then goes to his younger brother James in 1869.

Highland Park has always been a prized whisky. The Glasgow firm of wine and spirit merchants Robertson & Baxter, bought their first consignment of Highland Park whisky in 1879.

Pleased with the result, they took nearly 14,500 gallons in 1881/2, and in the following year just over 19,000 gallons, this represented nearly fifty percent of total output at the time.

In 1895 ownership passed to James Grant of Glenlivet distillery fame, increases the stills from 2 to 4 in 1898.

Highland Distillers invest in marketing the Highland Park as a single malt, in 1979, greatly improving sales.

During 1999 the Highland Distillers are acquired by the Edrington group and William Grant & Sons.

Location; Island region, whisky from Orkney. On the southern edge of the town of Kirkwall.

Matured in European Sherry casks with some American oak bourbon casks for balance. 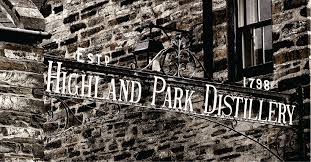 Take a tour of the Highland Park distillery.

The Highland Park distillery visitors centre is well worth a visit and regularly run guided tours of the distillery throughout the course of the day. A number of the tours include tasting sessions where you can sample some of the drams they have to offer.

Highland Park releases limited editions such as Valhalla Collection made up with  Freya, Thor, Loki and Odin.

Our Highland Park Whisky Range - In stock and available to buy