Jura Whisky Distillery produces an island region malt whisky. Located on the east coast of the Isle of Jura facing the main land of Scotland. Only 60 miles from Glasgow as the crow flies. Be prepared for a six hour drive and two ferry crossings to get there.

The Isle of Jura whisky distillery produces a gently peated whisky. Popular with independent bottlers, old and rare vintages can be found.

The Jura whisky distillery is set near to a cave where illegal distilling is known to have been carried out since the 1600s.

The distillery was officially established in 1810 by the Laird Archibald Campbell. Who calls it the “Small Isles Distillery”

The whisky distilled at that time was a characteristic peaty Islay style malt whisky, not at all like the present day Jura malt whisky.

Richard Campbell, in 1853, leases the distillery to Norman Buchanan. Who files for bankruptcy in 1867. J & K Orr gains control.

Eventually the distillery was licensed to a James Ferguson, in 1876, and renovated in 1884 records show that it was distilling 65,000 gallons per year.

In the early 1900’s the Ferguson’s seem to have been in disagreement with the then Laird Colin Campbell and decided to relinquish the Jura distillery. They dismantled and sold the machinery, which they had installed.

Later the roofs were removed to avoid paying rates and the distillery fell into ruin. It seemed that whisky distilling on Jura had come to a permanent end.

In the 1950’s Robin Fletcher owner of Ardlussa Estate and Riley-Smith owner of Jura House and Ardfin Estate had meetings to see how they could solve an anticipated jobs and population crisis on the island.

The reopening the distillery to see if new people could be attracted to the island was considered. They were joined by farmer, distiller and architect Delme’ Evans. Together they eventually raised financial support to rebuild the distillery.

During the 1960-63 period the distillery was reconstructed by the Jura Distillery Co Ltd with financial support from Mackinlay McPearson Ltd as part of Scottish & Newcastle Breweries.

Delme-Evans designed and built the new distillery on the site of the old ruined one. He said of his plans.

“My primary aim was to construct an economic distillery within the space available. Everything had to be simple and fall to hand. You could not afford to complicate things in so remote a location.”

“Everything had to be designed in such a way that the new Jura malt could be produced“.

“It was our intention to produce a Highland-type malt differing from the typically peaty whisky last produced in 1900. I therefore designed the stills to give spirit of a Highland character, and we ordered malt which was only lightly peated.”

The new distillery was opened on April 26th 1963 and employed a quarter of the island’s male workforce.

In 1978 the number of stills were increased from two to four.

Invergordon Distillers acquires Charles Mackinlay & Co in 1993 from Scottish & Newcastle Breweries. With the deal comes the Isle of Jura and Glenallachie Distilleries. .

In 1994 Invergordon became part of  Whyte & Mackay with a brief spell from 1996 to 2001 referred to as JBB Europe before returning to Whyte & Mackay.

During 2007 United spirits buys Whyte & Mackay. Who themselves are acquired by Diageo in 2014.

Founded in 1810 by the Laird Archibald Campbell.

Maltings from Port Ellen Islay or Simpsons of Berwick 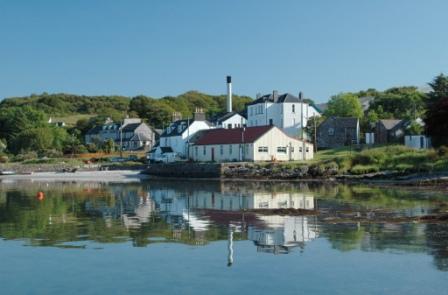 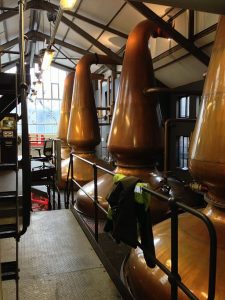 By sebastian.b. (Jura Distillery) [CC BY 2.0], via Wikimedia Commons

Take a tour of the Jura distillery

The Jura distillery visitors centre is well worth a visit and regularly run guided tours of the distillery throughout the course of the day. A number of the tours include tasting sessions where you can sample some of the drams they have to offer.

The Jura distillery core range for the UK consists of Origin, Diurach’s Own, Superstition, Prophecy and Jura Elixir.

Popular with independent bottlers old and rare vintages can be found.  The distillery produces limited editions.

Our Jura Whisky Range - In stock and available to buy