The Port Ellen whisky distillery was located on the Isle of Islay off  the west coast of Scotland.

Founded in 1825 this famous distillery with a cult status was mothballed in 1983. Finally closed in 1987. By then most of the property had been converted to a malting plant.

Although Port Ellen (port-ell-en) is not as “peaty” as the other Islay south shore distilleries of Laphroig, Lagavulin and Ardbeg. The Islay malt whisky produced was smokey phenolic  in style.

Port Ellen is a closed distillery from the early eighties. Highly sort after by collectors.

How the Port Ellen story began

Located 1 mile west of Laphroig the distillery was founded in 1825 by Alexander Mackay.

Who shortly afterwards became bankrupt. The distillery passes to other members of the Mackay family. George Maclennon, John Morrison and Patrick Thomson.

In 1833 John Morrison cousin John Ramsey arrives from Glasgow to take over the running of the distillery.

Three years later he takes over the distillery lease. Who pioneered export to the USA, developed the spirit safe and persuaded the government to allow Islay whiskies to be bonded free of duty.

Also under John Ramsey the distillery was the location of some of the earliest experiments into continuous distillation with both Stein and Coffey, Originators of Grain whisky distillation.

John Ramsey passes away in 1892. The distillery is inherited by his wife Lucy. who survives until 1906, passing the distillery on to their son Captain Iain Ramsey.

He sells the distillery to Buchanan Dewar who forms the Port Ellen Distillery Co Ltd in 1920.

They in turn were taken over by Distillers Company Ltd (DCL) in 1927 and subsequently the Port Ellen whisky distillery was mothballed in the 1930 due to a slump in trade.

Port Ellen distillery was reopened in 1967 by DCL, the number of stills doubled to four.

A Large drum malting facility was built opposite the distillery in 1973.

The distillery was mothballed in the great whisky cull of 1983.  Finally closing in 1987.

The site is now warehousing for DCLs’ other Islay distilleries. It is also home of a large malt plant, which supplies the remaining distilleries on the island, thanks to an official agreement signed to secure employment for the island’s workforce.

Port Ellen has been closed for 24 years so bottlings of this rare and Iconic Islay malt are becoming very short in supply.

The Islay malt whisky produced was smokey phenolic  in style.

Founded in 1825 by Alexander Mackay.

Mothballed in 1983 equipment believed to be dismantled and removed.

Although Port Ellen (port-ell-en) is not as “peaty”. The Islay malt whisky produced was smokey phenolic  in style.

Port Ellen is a closed distillery from the early eighties. Highly sort after by collectors. 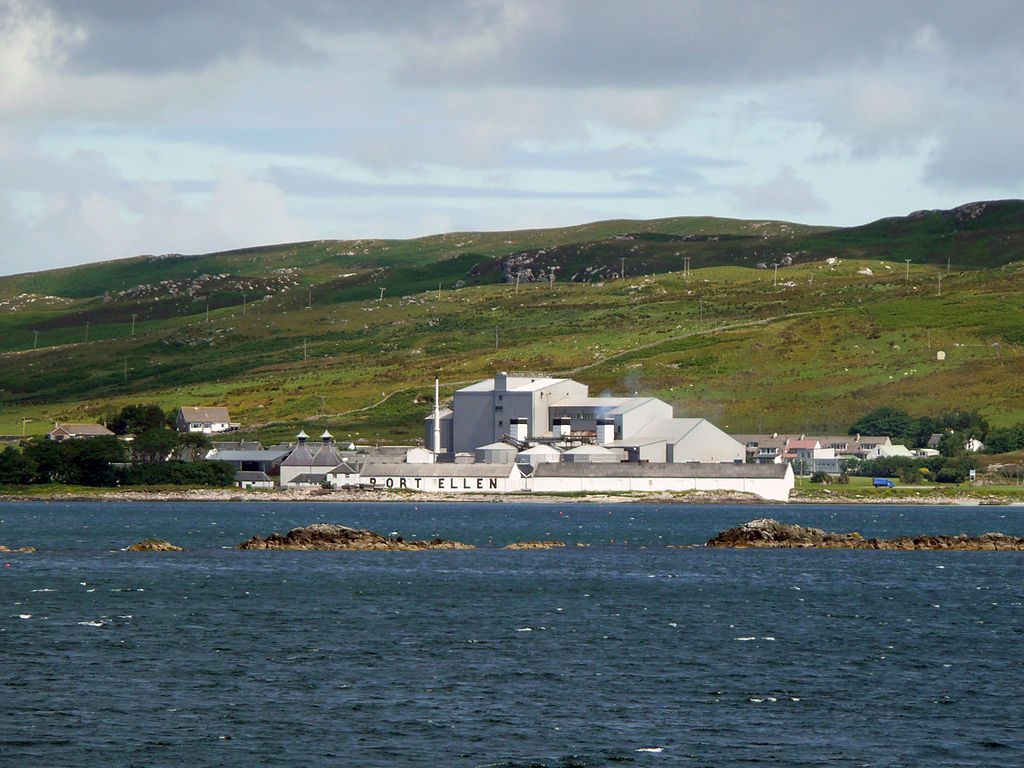