Speyside whisky Distillery is on the Southern edge of the Speyside whisky region of the Scottish Highlands. Located 3 miles along the B970 east of Kingussie.

The Speyside single malt house style is light and delicate.  The use of Tawny port casks in the finishing results in a soft fruity creamy whisky.

Speyside Whisky distillery takes its name from the original Speyside Distillery in Kingussie.

The old distillery started in 1895. However, was only in only production until 1905, before being demolished in 1911.

This new Speyside Distillery was built following one man’s dream to have his own malt whisky distillery. George Christie a well-known merchant chose the tranquil spot at Tromie Mills, three miles from Kingussie..

A disused barley mill and croft, dating back to the 1700’s, had been run for many generations by the McGregor family, the final milling being finished by Alex McGregor in 1965.

George Christie commissioned Alex Fairlie a dry stone dyker to build the distillery. Alex single-handily laid all the stonework over a period of 20 years. The old mill and water wheel were retained and are still in working order.

The following year the Speyside distillery is sold to a group of private investors including George’s son Ricky Christie, Ian Jerman and Sir James Ackroyd.

In 2012 the distillery was sold again, this time to Harvey’s of Edinburgh. Re-marketing The Speyside name for the bottles was replaced by Spey.

The distillery is not a large production plant, being equipped with a four tonne GlenSpey mash tun. Four 20,000 litre wash backs, a 13,000 litre wash still and a 7,000 litre spirit still, both stills being made by Forsyth’s of Rothes.

Mass production never being one of Mr Christie’s objectives.

Water is drawn from the old mill lade which originally ran the waterwheel that powered the old mill that gives the site its name; the same water source is used for process and cooling in the distillery.

The distillery has only 4 employees, they lovingly watch over the small batch production.

Building commenced in the late 1960s.

The first spirit was distilled in 1990.

Matured in American oak bourbon casks with some Sherry and Tawny port butts.

Initial the malt whisky was marketed under the Drumguish name as a No Age Statement Whisky.

A “black” whisky called Cu Dhub as a replica to fill the gap left by the discontinued Loch Dhu marketed by Diageo was also available. Eventually a 8 year old appeared as the Speyside 8 year old Single Malt Whisky in 1999. Followed up with a 10 year old as stocks matured.

With the new owners the marketing name was shortened to simply Spey.

Also Beinn Dubh as a replacement for the Cu Dhub Black whisky. 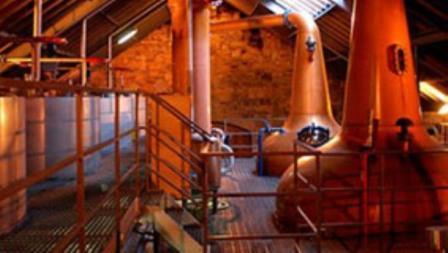 Take a tour of the Speyside distillery

Speyside distillery tours are available by appointment only

Click here for more information on the Speyside Distillery

Our Speyside Whisky Range - In stock and available to buy