Tobermory Whisky Distillery is the only distillery on the picturesque Hebridean Isle of Mull. This is an Island region malt whisky.

Located on the seafront at the south western end of the fishing town of Tobermory.

Over its long history the distillery has also known as Ledaig.

The first one is a gently peated malt called Tobermory.

The second is an extremely smokey peaty malt called Ledaig.

Tobermory (TOBER-more-ay) is derived from the Gaelic “Tobar Mhoire”, which means “Well of Mary” and relates to the well and chapel of St Mary. There was a small Christian settlement in Tobermory from early times.

The original name for the distillery, Ledaig (pronounce Led-chig) is also Gaelic and means “Safe Haven”.

The distillery was shut down again in 1928 and didn’t reopen until 1972.  With the buildings and equipment refurbished, this time as the Ledaig Distillery (Tobermory) Ltd.

However in 1975 the receivers where called in and the distillery was mothballed.

During 1978 the distillery was purchased by Kirkleavington Property Co. (Yorkshire).  Renaming as Tobermory Distillers Ltd. However after 3 years production stops. Some of the buildings are converted to flats and others rented out to a local dairy for cheese storage

In 1990 the distillery resumes production.

In 1993 Burn Stewart, who’s other distilleries at the time included Bunnahabhain and Deanston, acquired the distillery. Paying £600,000 plus £200,000 for stock.

They sell the firm onto the Distel Group Ltd in 2013.

Founded in 1797 by John Sinclair

Location; Island region on the Isle of Mull, Tobermory.

Matured in a combination of American oak bourbon and European sherry casks.

Over the years with all the name changes  between Tobermory/Ledaig the brand can look confusing.

Under Burn Stewart  the branding has become a lot clearer.

The first one is a gently peated malt called Tobermory.

The second is an smokey phenolic peaty malt called Ledaig.

Earlier bottles of both Tobermory and Ledaig can be found in both limited edition  and discontinued malt whisky sections. 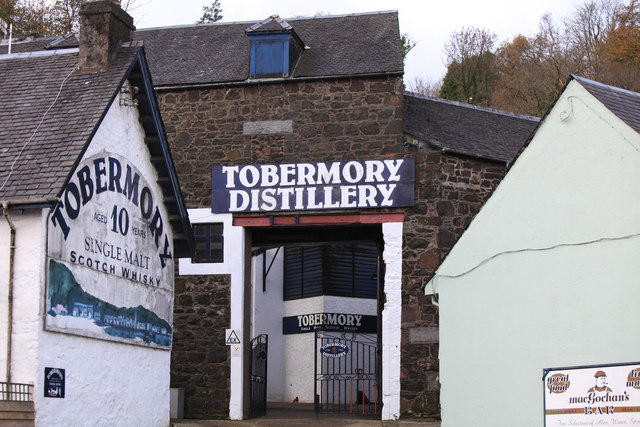 Take a tour of the Tobermory Whisky Distillery

The Tobermory distillery visitors centre is well worth a visit and regularly run guided tours of the distillery throughout the course of the day. A number of the tours include tasting sessions where you can sample some of the drams they have to offer.

Click here for more information on the Tobermory visitors centre

Our Tobermory - Ledaig Whisky Range - In stock and available to buy