Tomintoul (tom-in-towel) whisky distillery is located in the Speyside region of the Scottish Highlands. The distillery lies in the beautifully wooded valley of Avonside.

The first in the Tomintoul area licensed distillery was called Delnabo built shortly after the Excise Act of 1823.

The first un-named distiller went bust and the distillery was taken over by George Smith of Glenlivit fame.

The distillery was used as an addition to his distilling activities until he moved to the present Glenlivit site in 1858.

At the time there was a shortage of malt whisky for blending.

The location chosen was five miles north of Tomintoul, 2nd highest village in Scotland, close to the famous whisky producing Glenlivit area with a plentiful supply of water from the Ballantruan Spring.

The following year Whyte & Mackay invest in the distillery and increase the number of stills from 2 to 4.

The Tomintoul distillery is  purchased by Angus Dundee Plc in 2000

The malt whisky produced has been a long time contributor to Whyte & Mackay blends.

Founded in 1964 by the Tomintoul Distillery Ltd.

2 pairs of stills with boil balls in their necks.

Matured in a combination of American oak bourbon casks, refill hogsheads with some Oloroso sherry butts. 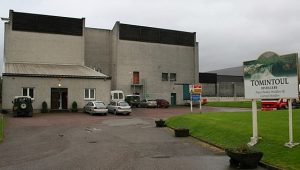 Visitors by appointment only

Our Tomintoul Whisky Range - In stock and available to buy